First multi-day bikepacking trip in 2 years! That was a long pause, the longest in more than a decade, and only partly due to covid or repeated wildfires. Even in 2022, I was sluggish and had not planned anything yet. Then saw that the Bones to Blue bikepacking route was having a group start in June and that was an easy one to hop on. The route suffered from wildfires and smoke both in 2020 and 2021.
The Bones to Blue bikepacking route consists of separate 2 loops that start and end in Truckee for a total of about 400km/250 miles: A smaller loop above Truckee (Bones) and then a bigger loop around Lake Tahoe (Blue). Forest Baker (to the right of the stop sign in the picture) has developed the route and reconnoiters it regularly - even checking on possible problem spots (snow) right before the group start. He knows what makes for a good route and the area offers many possibilities. Mostly single track, only minimal amount of pavement that cannot be avoided (even that is scenic and not too aggravating with traffic). No junk miles make it one of the best multi-day bikepacking routes. The site for the route with gpx files is here: http://bonestoblue.com/
It is a much more challenging route physically than it looks on paper because of elevation gain, altitude, and single track. Even Forest's "Forlorn 4 day ride" is a hard touring pace with 35-40 (or more!) hours of moving time. The fastest riders can do the whole route in under 48 hours total and there were a bunch of them this year. Jeff Kerkove finished in 37 hours and set a new course record.
The inaugural event for the Bones to Blue route was in 2017, although I missed the initial event because I went on the TransCanada Trail aka "Great Trail" that year. The TransCanada Trail received much media attention then because it was officially completed after being 25 years in the works, celebrated by even getting the new name "Great Trail". Reality was far from the hype - but you only find that out by doing it: Biking the TransCanada Trail. In contrast, Bones to Blue is a fantastic route put together by somebody who understands mountain biking.
In 2018, I rode the Bones loop and about half of the Blue loop two weeks after the group event and in 2019 I did the Blue loop minus two sections. https://rolandsturm.blogspot.com/2018/08/  But I had not done the whole route yet. It also changes over time, though slightly. Around Prosser Hill, previous incarnations of the route went  into an area also used by motorized vehicles, which made for a sandy and tedious start. But this year's route has improved on it and has excellent trails at the beginning.
The day before the start, there is a pre-meeting at Pizza on the Hill. A nice opportunity to meet other similarly-minded riders (everybody rides their own pace, so during the day you rarely see/talk to anybody). And with Covid - and also the huge changes/growth the bikepacking community experienced over the last decade - nice to catch up.

I've known Forest for more than a decade, we met on many similar events. Alissa Bell is a newer participant to bikepacking, but with plenty of backpacking experience and huge endurance. She has an excellent website/blog that I had seen before and recommended, although only made that connection later.  https://exploringwild.com/  While most of us probably try to start well recovered because this loop is going to be a major effort, Alissa had been out for 5 days hiking in the Desolation Wilderness, description on her website. 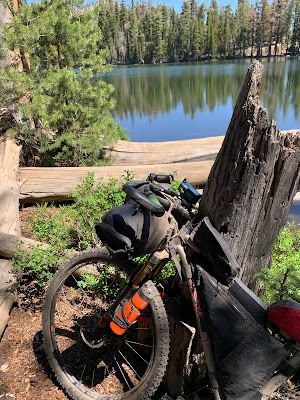 The "Bones" in the smaller one day loop refers to the fate of the Donner party in 1846/47. The Donner Party began as just another nameless pioneer trek to California, but the Great American Dream turned into a nightmare. Surely they would have preferred not having a lake or pass named after them. Based on one count of the group (which includes the Miwok guides Luis and Salvador), 42 out of 90 died and cannibalism saved some of the survivors. The Bones loop goes north of Truckee, past Alder Creek where the 2 Donner families spent the winter in of 1846/47. George and Jacob Donner had fallen behind the rest of the group after breaking an axle on a wagon (neither survived). Most other families were a few miles ahead and wintered at Donner Lake. 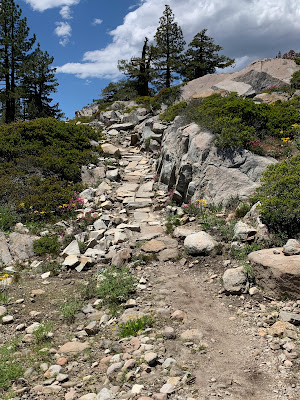 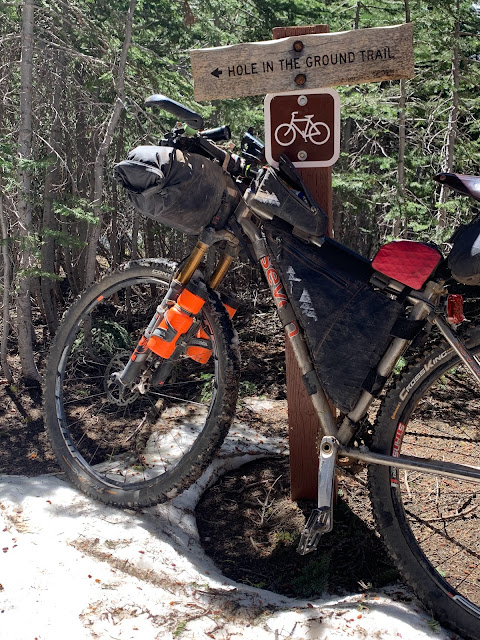 The infamous Hole in the Ground trail. It has left holes in many people over the years. Indeed, two scars on my right leg are from it. Yet Forest pre-rode it the week before just to make sure it wasn't going to be too brutal (because of late snow and fallen trees).
There was a 20% chance of isolated thunderstorms. Unfortunately, for me it was a 100% and even was pelted with hail right when I was on a fully exposed section. People faster than me (like Forest, Julie) were already sheltered, people behind me didn't get rained on. But the isolated thunderstorm did find me and I was getting quite chilled.

The last section is over Donner Pass and through the original Donner Pass train tunnels, riding over the top of the China Wall, which exerted a high toll among the Chinese laborers who did the dangerous and arduous work to connect the transcontinental railroad through the Sierras. Actually a tedious gravel section, although the novelty factor doing it the first time will compensate and it is slightly downhill. It wasn't my first time, though, so no compensating novelty.


I had signed up for the "Forlorn" route where Forest even reserved camping sites. So a much more social ride than I usually do and his wife Annie and their kids joined us that evening with supplies.

The second "Blue Loop" goes around Lake Tahoe, using the bike-legal sections of the Tahoe Rim Trail wherever possible. There is a lot of climbing, but it is very rideable. There are several Flume trails (distinguished by some second part in their name). Unfortunately, it was middle of day on a weekend, so those trails were crowded.
The first Flume trail, coming after the climb out of Incline Village, is the prototype of smooth flowing single track (Incline-Flume trail). I trust there are hardcore riders who will find this just "too easy and boring", but it would be my favorite trail, just avoid it middle of the day on a weekend. 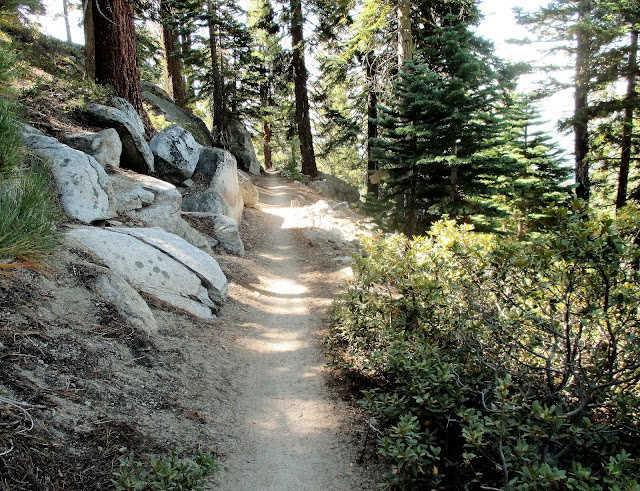 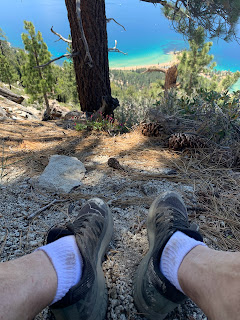 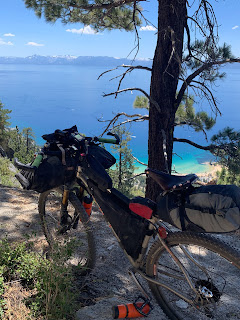 For night 2, Forest had reserved a cabin at Spooner Lake. At this time of year, a swampy lake area could be mosquito hell, but it wasn't.  None at all, I even sat by the lake at sunset. This is likely to change in July, I suspect we just were out a little early. On the Bones route, there were already several patches with aggressive mosquitoes. Another bonus for June, it might be the ideal time: Long daylight, low probability of wildfires, warm but not too hot, before the mosquito peak. Only risk is lingering snow, but there was virtually none left. 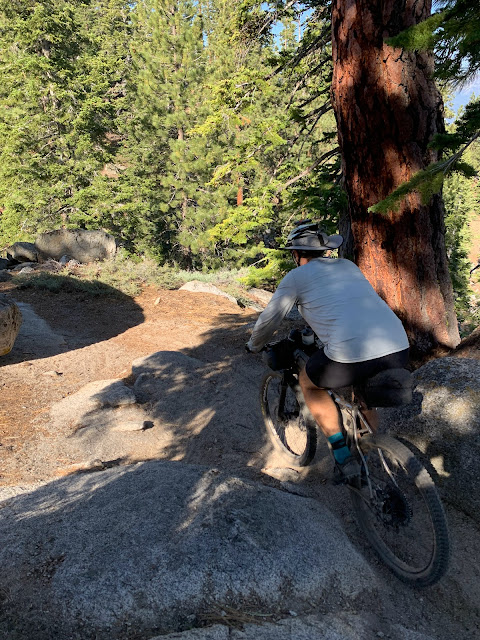 The afternoon was hot and tiring, you can tell by how we looked when getting to the Kingsbury food market. Note Forest's shopping basket. He is a big guy, on average probably 70 pounds on me, and his shopping reflected that. As he was paying, I thought "oh, this is one expensive store", but then when it was my turn, the total was more like a 1/3.
After Kingsbury, there is a brutal climb, in the sun. Initially through a ski resort, but then some very steep staircases. Gives some upper body workout as well, plenty of lifting up the steps here. This part up to Star Lake may be the hardest of the route, partly because of steepness and partly because it is midday fully in the sun and hot, looking down into Nevada.

It was going to be an (overly) long day in any event, but there was yet another challenge: The Tahoe Rim Trail goes past the tallest mountain in the Tahoe area that day, Freel Peak. Freel Peak is 3318m (just a bit under 11,000 feet), which makes it the tallest summit in the Carson Range, El Dorado County, and the Tahoe area. So I can't just ride past this peak without climbing it. Especially since I have no other reason to get to this peak otherwise and I already missed it last time I was on the route.

Freel Peak is not a particularly attractive mountain and the way up is mostly sandy and steep. Nice views from the top, but other than being the tallest mountain it has no other redeeming qualities. By the time I came down, some other riders must have gone over the saddle and I found a few sour patches on my bike. I think it was from Jake Inserra and I enjoyed them.
There wouldn't be any long steep climbs afterwards, but still a lot of ups and downs after Armstrong Pass and around Freel Meadow. I think in the future, I would aim for camping there, it may add another day for the route, but the Freel Meadow area would be lovely for camping and it is plenty of riding already from Spooner to here. I saw many just perfect camping spots, probably would be dry camping as I didn't see a creek and it is high up. Necessary to fill up on water before then, but I did that after Freel Peak, multiple creeks crossing the Tahoe Rim trail then (at least in June, they may dry out later). It also gets technical again and that isn't great when one is tired. I took a fall and broke off one of my Ergon bar ends. Maybe two miles before Luther Campground, I took a shortcut to highway 89 (Grass Lake Spur trail) and rolled pavement down to Myers where I reconnected with the trail.
Fallen Leaf was a major disappointment. A huge, loud, smoky campground. Finally a year without wildfires and the campground felt like being in the middle of one. Only Forest and Julie were there when I arrived, which already was well after dark It does have showers and I bought a few shower coins and used 1 to get clean (also the scrapes I got from the fall) and left the others for latecomers. Then I headed back out again, just 5 minutes away from the campground was much more pleasant, although it still wasn't great. Especially when compared to all the great campsites I passed by in the early evening around Freel Meadows.
The final day starts with a long stretch of road riding on highway 89. The western side of Lake Tahoe is mostly designated as wilderness area where bicycles are not allowed. It is not a bad road ride, though, especially early in the morning when traffic is minimal and the sun isn't biting. There are two more trail sections starting near the north end of the lake, the first one with a brief section on the Western States trail.