We had 2 nights in Germany before flying back to California, the weather was excellent, and Obin was back from Italy, so we left for one last overnighter, this time into the Schwarzwald. We biked through the Schoenbuch to Herrenberg, where we took the train to get into the Schwarzwald (an hour further west)There was just a little bit of single track after Weil im Schoenbuch. 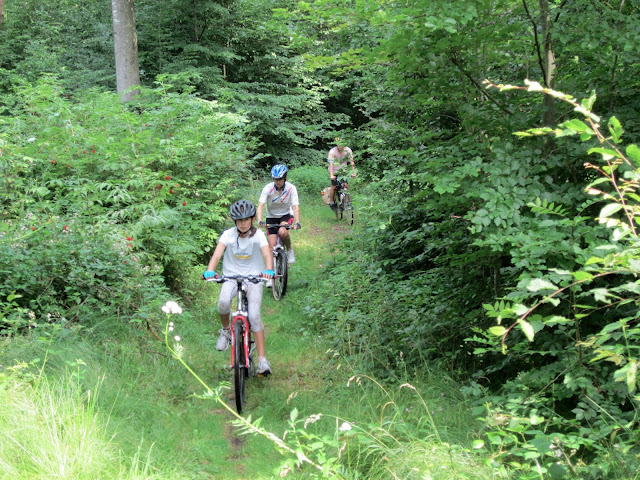 Auf der Teufelsbruecke (or maybe not, but one of the bridges) 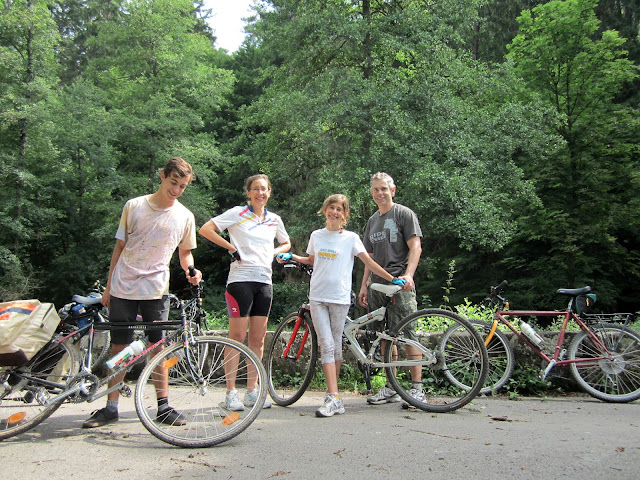 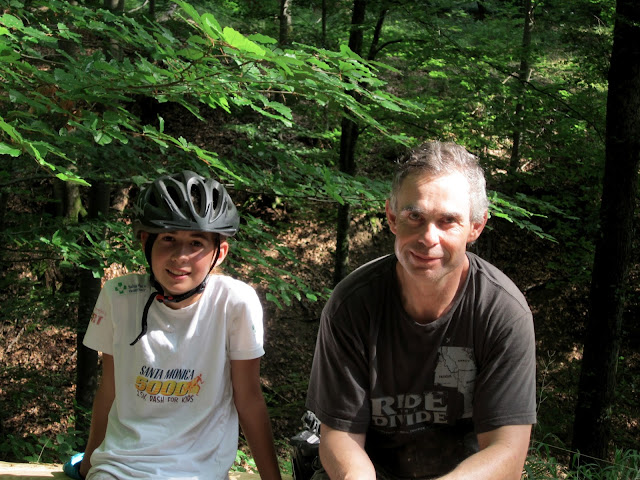 It was a fairly chilly morning, Anya complained about her hands getting too cold, so the girls were  exhausted by the time we made it to Herrenberg and hopped on the train. 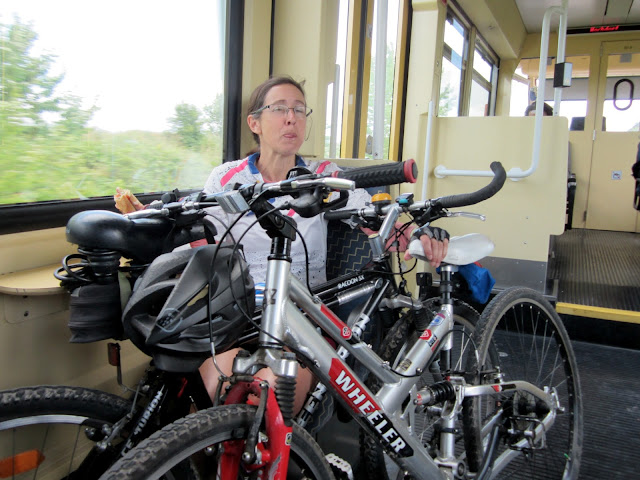 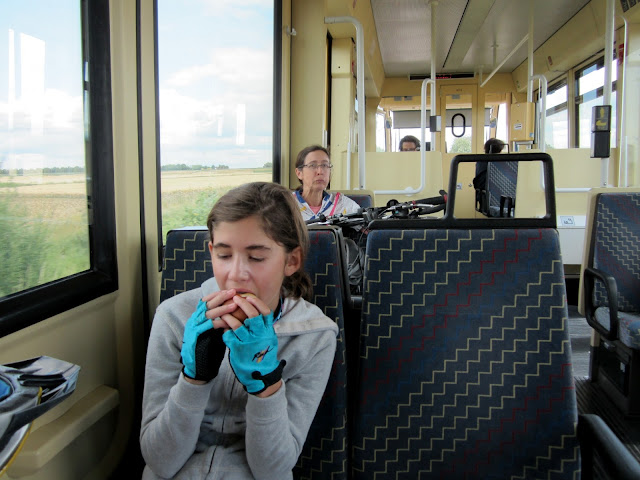 We skipped the very first part of the Murgtalradweg, which was supposedly just a steep downhill and got of the train in the next town. 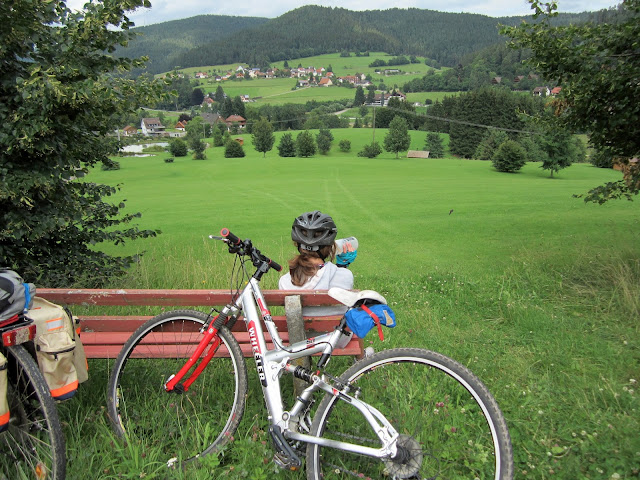 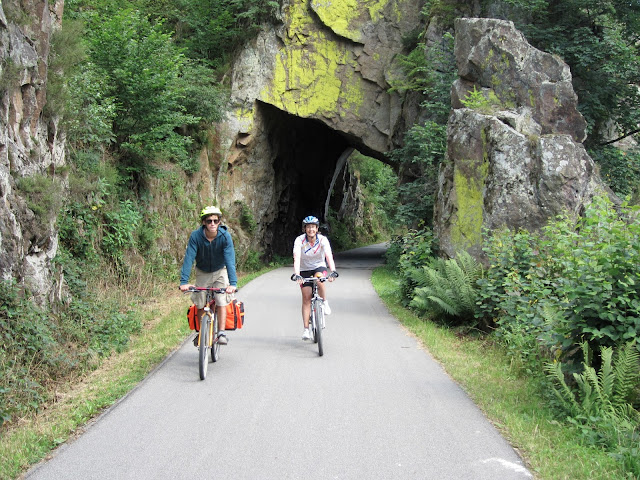 Compared to the Donautal, there was a lot of steep ups and downs, despite roughly following a river, but that is how the Schwarzwald is. We stayed for the night at a small village inn, in fact, that picture shows the main road. 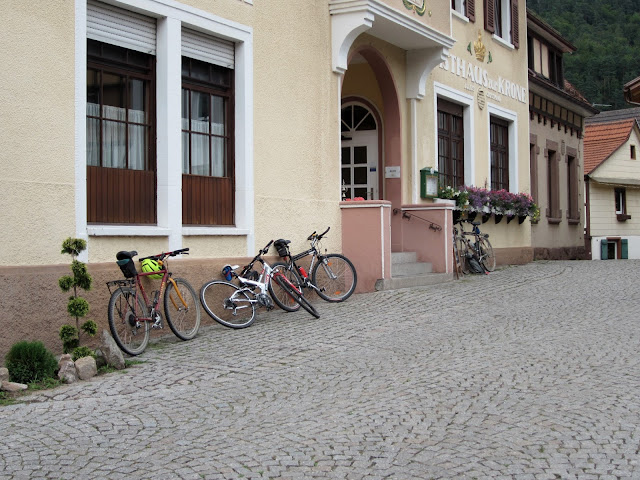 We continued the next morning and made it to Rastatt late in the morning. Only an hour of riding to France and Obin was eager to continue and get on the other side of the Rhine, but Kathy and Anya were ready to return. So we didn't ride on, but after a quick look at the Rastatt Castle went to the train station, took the train to Stuttgart, then the S-Bahn to Leinfelden,  and finally rode the Siebenmuehlental back to Waldenbuch. 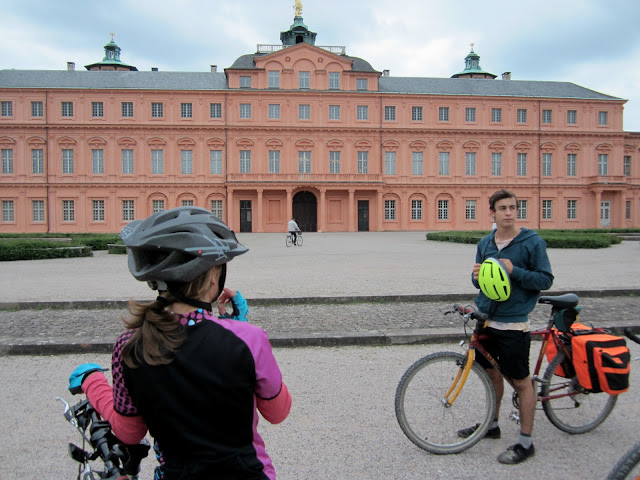 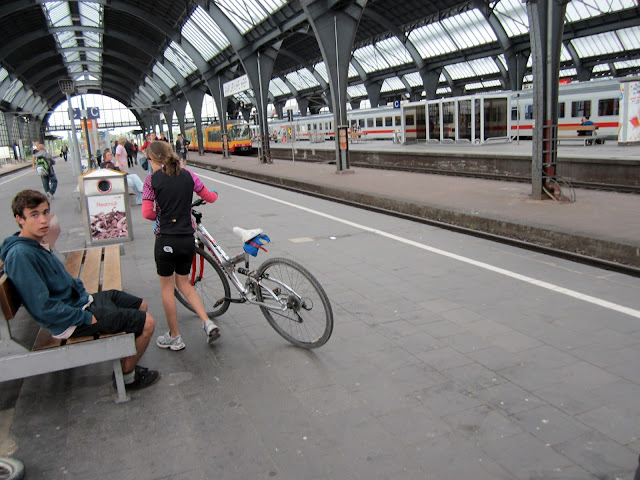 Posted by Roland Sturm at 10:22 AM No comments:

On our family vacation to Germany this summer, the weather was miserable during the first week, but turned quite nice in the last week and we went on a number of rides. The longest was a 4 day trip along the Donau and returning along the Lauter and over the Schwaebische Alb. This was just Kathy, Anya, and me as Obin was visiting his girl friend in Italy. 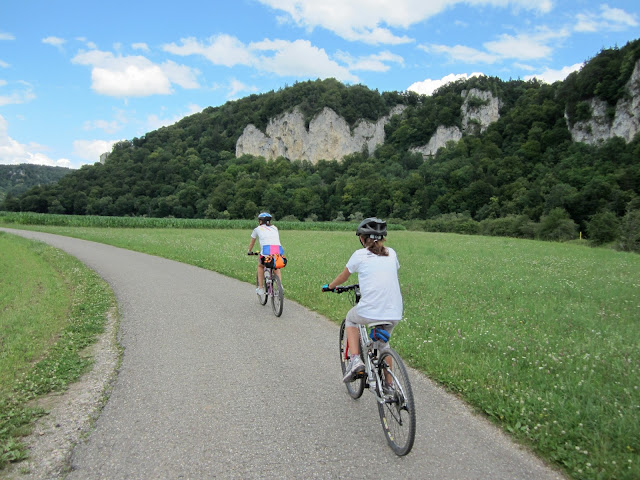 We started in the morning from Waldenbuch, Anya on Oma's bike (so she had the best one - but then as an 11-year old, she should have the fastest bike), and headed to the train station in Boeblingen. Turned out to be rather stressful as the train station was torn up, no information, and we really didn't know how it worked. But we somehow got on the right train and a few hours later headed out of Tuttlingen. The Donautal Radweg is flat and smooth, just perfect for an 11-year old to go on her first multi-day trip. We've done stretches as day rides a few years earlier, but now we were going for 4 days. 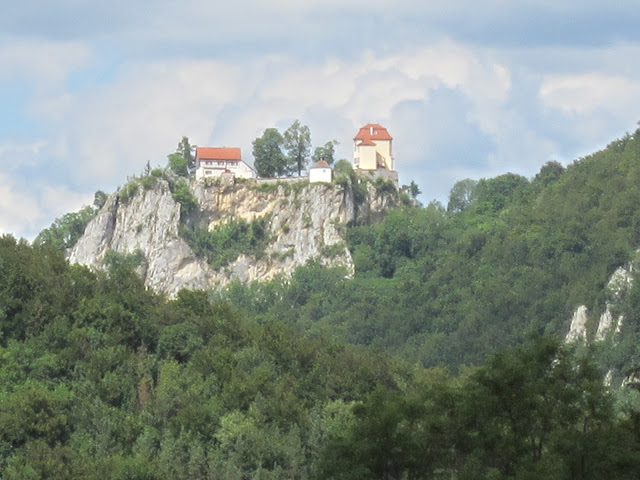 We stayed at a Bauernhof between towns, maybe an hour before Sigmaringen.

The next day was all along the Donau, but the weather looked iffier. In the afternoon, the clouds were getting thick and it was a safe bet that there would be a serious downpour. Fortunately, Kathy checked her Iphone during a break and assured us that there is a zero percent chance of rain for the next 4 hours. 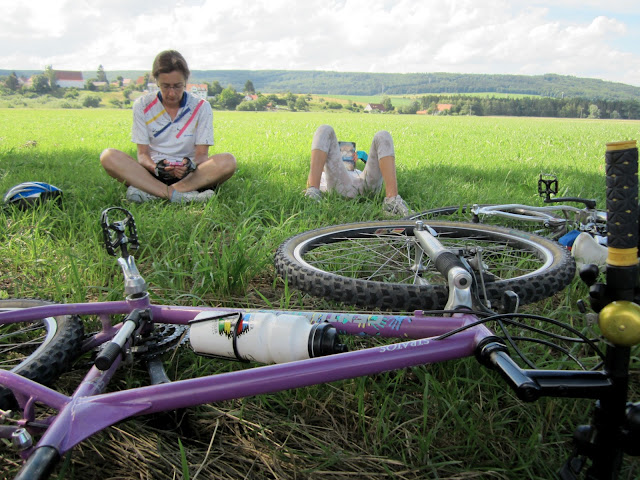 Nevertheless, I was concerned and thought we might just make it to Obermarchtal in an hour and called ahead to get a room. Good move because just as we pulled into the driveway of the hotel, it started pouring (with thunder and lightning), but we were off the road. Would not have been the best start for Anya's first biketour to get stuck outside in a heavy thunderstorm. 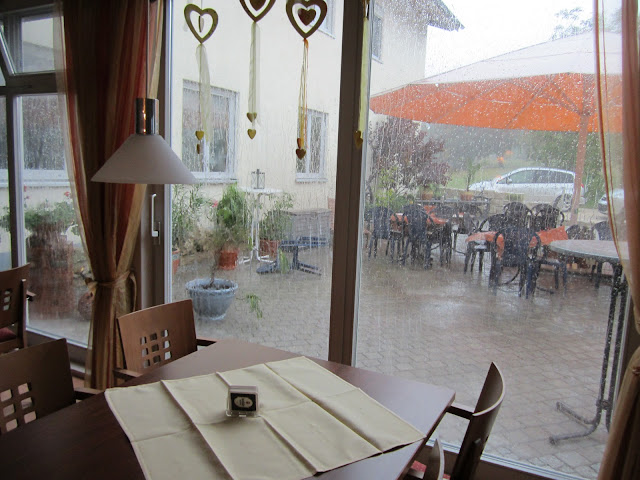 A few hours later, the storm had passed and we had a pretty sunset and checked out the impressive cathedral of Obermarchtal. As it was getting dark, I didn't take pictures inside, but it was similar in style, but not as over-the-top as the one in Zwiefalten (a few miles up the road) that we visited a week earlier. The picture below is from Zwiefalten (and that's why Obin is in the picture). 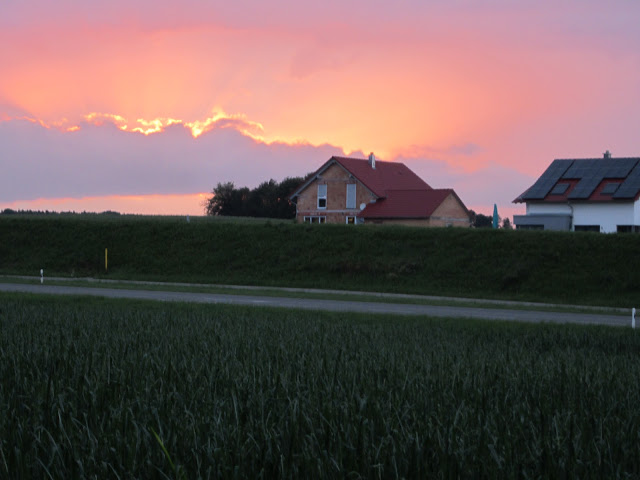 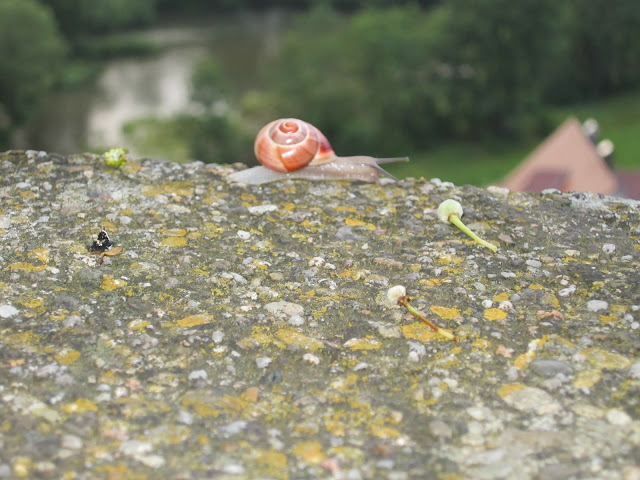 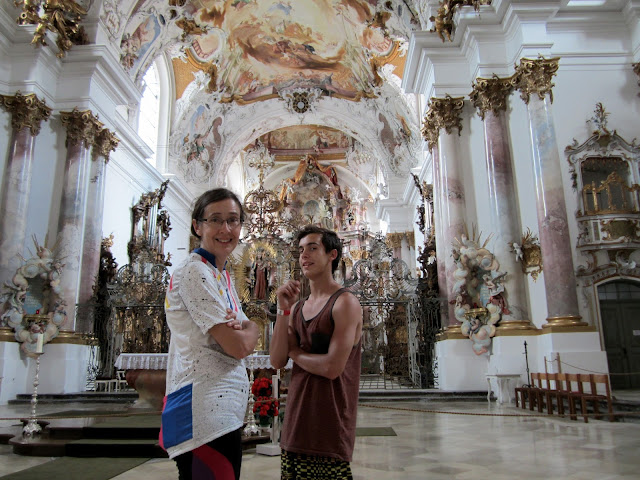 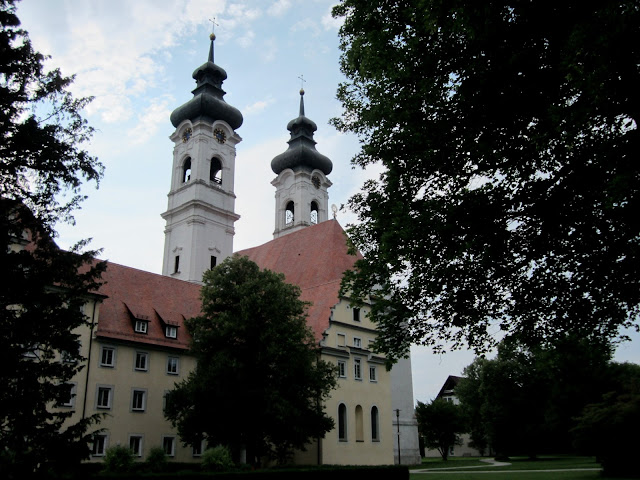 But maybe the most interesting thing about Obermarchtal are the storks. You don't see them that often, but they are always nesting in Obermarchtal (and I think that even is the city hall): 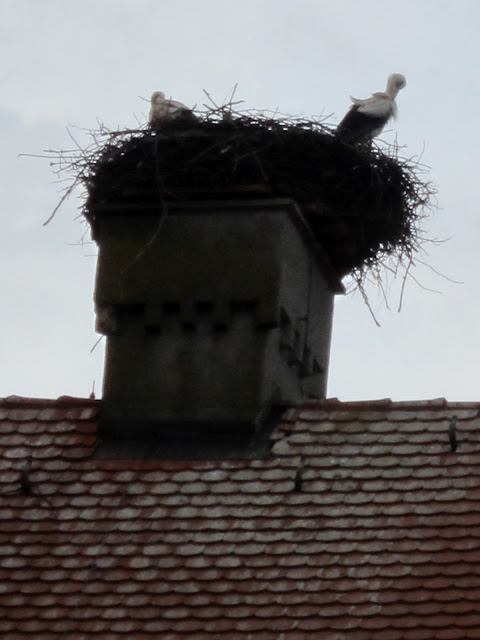 Day 3 took us away from the Donau and we started heading up the Lautertal. It was even prettier than the Donau and a bit more gravel/dirt than pavement. The next picture is at the Grosse Giesel waterfall, I remember kayaking it down many times as a teenager. Now, this whole area has become a nature reserve. 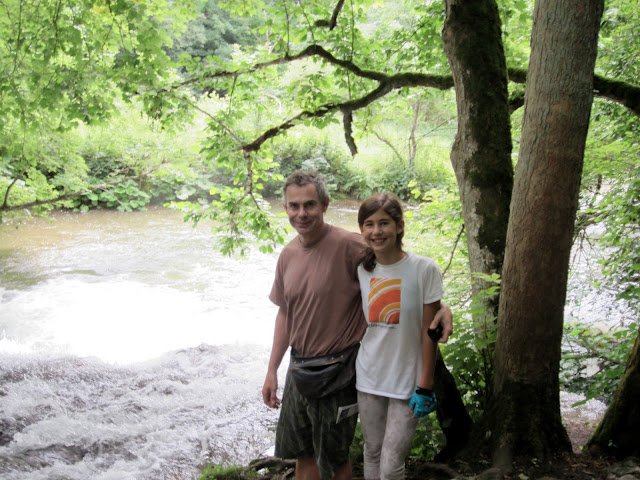 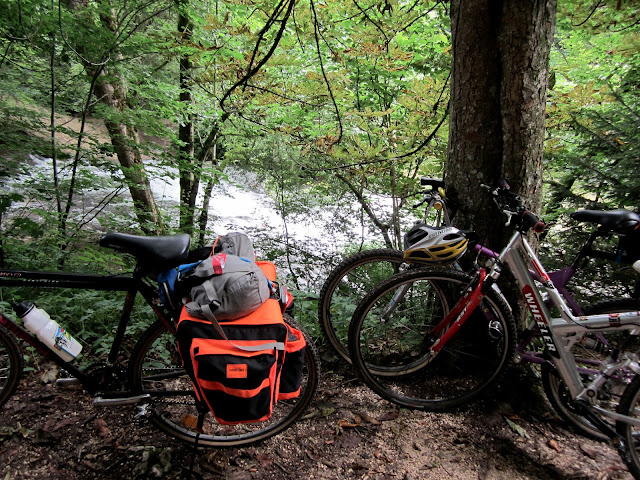 We had to get across the Schwaebische Alb, so a fair amount of climbing was on the menu for the afternoon, but we made it to Muensingen, the highest elevation of the ride,  by mid-afternoon. Anya was exhausted (getting cross-eyed is a reliable indicator), but fortunately, there was ice cream and the rest of the day was downhill to Bad Urach. 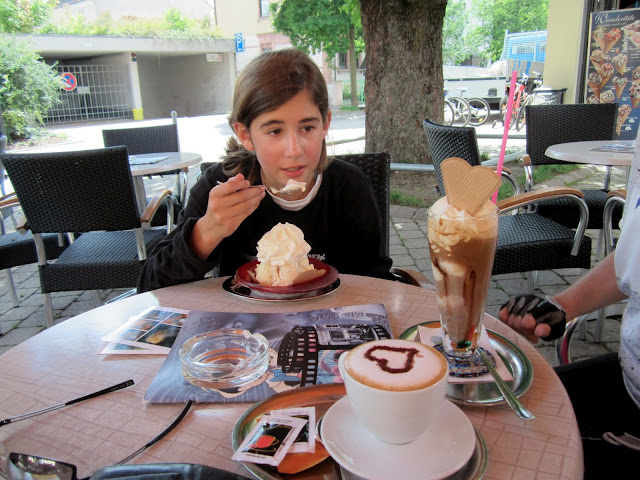 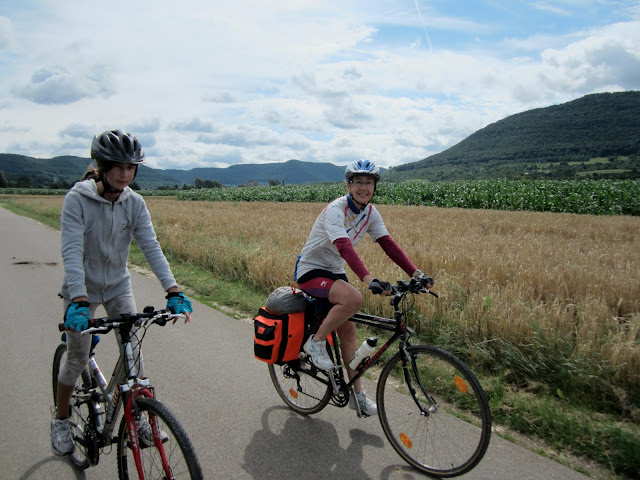 We stayed in Urach, not a bad town, but the least attractive overnight place of the trip. But it had been a long day, so everybody was glad to be done. The next morning was a initially a bit of city riding through Urach/ Metzingen, despite being a bike route, and Anya got some new biking clothes on the way. This was almost the last climb (and it was at the top of the last steep one out of the Neckar valley in Neckartailfingen). 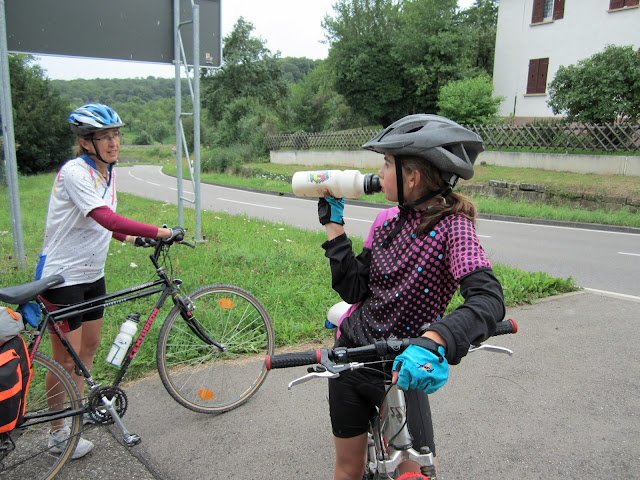 It was a cloudier day and looked like rain, but we were on the home stretch, so weren't too worried. In between, we took refuge in a bakery during a downpour, but it didn't last too long. Otherwise, it was fairly gentle drizzling only. 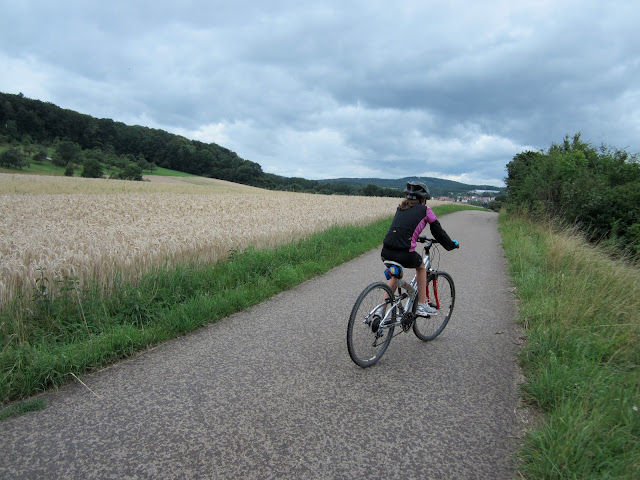 How often do you see an egg vending machine? Maybe not exactly the middle of nowhere, but it was at the outskirt of a small town along the bikepath: 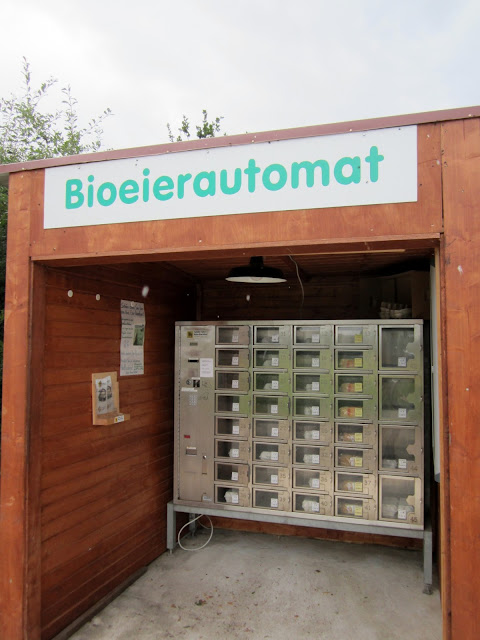 Last hour before getting back to Waldenbuch: 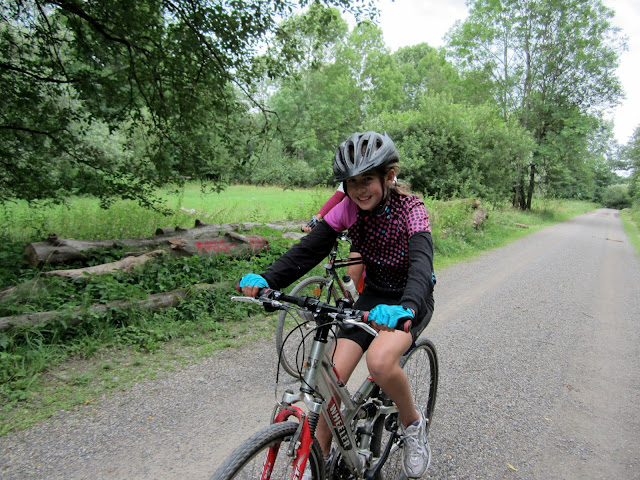 But as it didn't rain, we took one last stop for a Spezi and Radler. 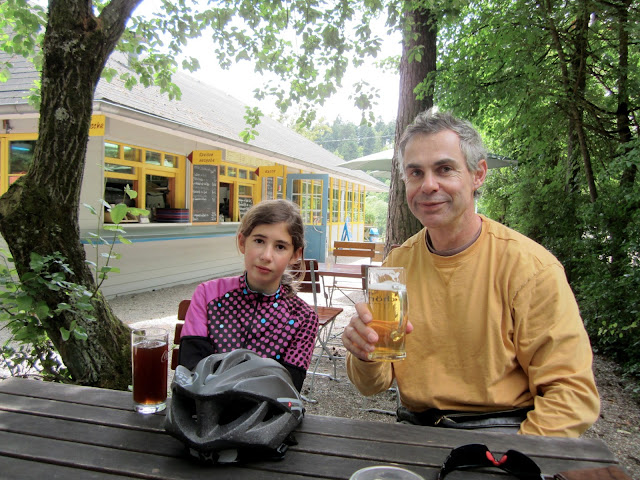 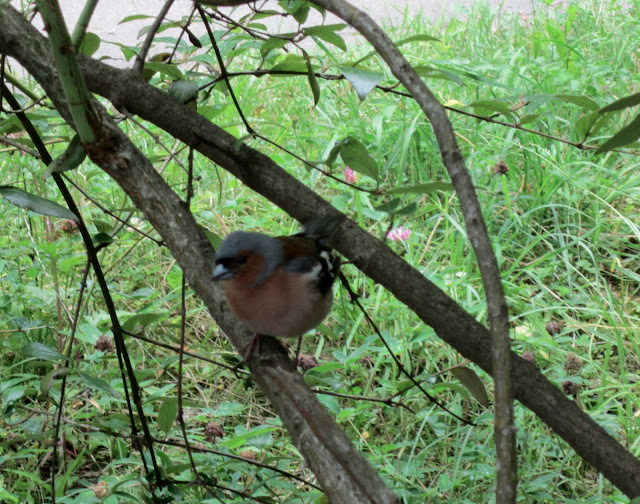 Posted by Roland Sturm at 9:48 AM No comments: